The ancient city of Side is a historical and tourist area that attracts all visitors to the Side region. Side, in addition to its great natural beauty, is a city of history and culture that has hosted many civilizations and still carries the traces of these civilizations.

Side is a city connected to the Manavgat district in the province of Antalya. 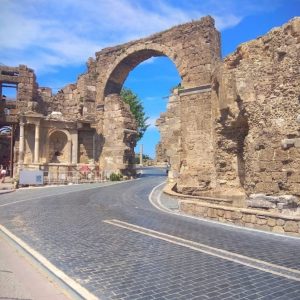 The ancient city of Side is a port city built on a peninsula of approximately 400 square kilometers. The name of the city, which dates back to the 8th century BC. is “garnet” in the Luvian language, one of the oldest peoples of Anatolia. Until the second century, Side spoke its own language and also had its own money.

Side, from the 7th century BCE, lived under the rule of the Lydians, Persians, Hellenistic kingdoms, Romans, Seljuk and Ottomans. From the 12th century onwards, the city’s inhabitants left the city due to the plundering and raids of neighboring kingdoms, and mostly migrated to Antalya. At the end of the 19th century, immigrants from the Crete region settled on the remains of the city and founded the Selimiye district.

The remains of the ancient city of Side

Among the remains of the Roman and Byzantine period that can be seen today in the ancient city of Side are the city walls and gate, basilica, commercial agora, bathhouse which is now used as Side Museum, Bishop’s Palace, Triumphal Arch, Vespasian’s Fountain, Monumental Fountain Nymphaeum, the ancient theater and the temples of Apollo and Athena. Except for the ancient theater and museum, visiting these remains is free.

The ancient theater welcomes visitors with all its splendor in the center of the ancient city of Side. It was built in the 2nd century AD. and is the largest ancient theater of Anatolia with a three-story stage building and a capacity of 17,000 people. The theater, which is similar in structure to the Roman Colosseum, was both a theater and an arena where gladiators and wild animals fought during the Roman period. It was used as an open-air church during the Byzantine period. Conservation work is currently underway in the theater. 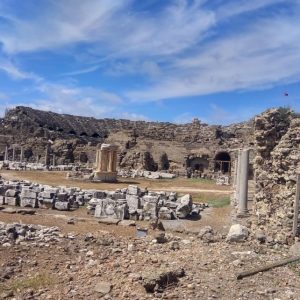 This monumental fountain, built in the 2nd century, is Anatolia’s largest and most magnificent fountain since ancient times. It consists of three parts carved into the walls, and there is a swimming pool at the front. There is a square in front of the pool and stone benches for lounging around this square. There are many decorative columns and ornaments on the structure. This magnificent building is one of the must-see places in Side. 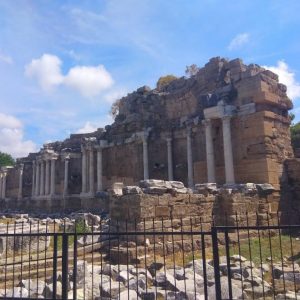 The building of the Side Museum, which has been in operation since 1962, was originally built as an agora bath from the 5th century AD The building consists of five parts and houses many archaeological exhibits from the Hellenistic and Roman periods these sections. In addition, there are three side-language inscriptions in the museum, dating back to the 2nd century.

Temple of Athena and Apollo:

The remains of the temple dedicated to the two great gods of the city, Athena and Apollo, are located east of the port of Side, south of the peninsula of Side. The construction of temples dates back to the 2nd century AD. Some temple columns have been restored to their original places. Sitting on the stones and watching the sunset from this place is an activity that must be performed by everyone who comes to this beautiful resort.

Overall, with 2,800 years of history, the ancient city of Side offers all visitors a visual and cultural feast.

We organize trips to the Turkish Riviera. Our trips are organized with a Professional guide. Our goal is to ensure an unforgettable holiday experience and get to know a little more about the beauty of Turkey.